Hardworking, low-income families in need of decent, affordable housing apply for homeownership through our Homeownership Program. Our Homeownership Services Committee selects homeowners anonymously based on three criteria: 1) The applicant’s level of need; 2) Their willingness to partner with Habitat; 3) Their ability to repay a mortgage through an affordable payment plan. This selection then moves to the Board of Directors for final approval, which is also done anonymously.

Habitat’s homebuyers invest hundreds of hours of their own labor, called “sweat equity,” working alongside volunteers and other Habitat homeowners, in addition to paying an affordable mortgage and receiving financial education.

Habitat for Humanity of Denton County follows a nondiscriminatory policy of family selection. Neither race nor religion is a factor in choosing Habitat’s homeowners.

Levatta Crawford is the single mother of 5 children. She is recently divorced and receives no child support; she works two jobs and is the sole provider for her family. After all she has been through, Levatta continues to have a strong, positive attitude, and, after applying two times, never lost faith in one day owning her own Habitat home.

In December 2015, Levatta’s oldest son was shot and killed. He would have turned 31 last October. With the sudden loss of her son, and the loss of her nephew in a similarly tragic manner just eight months prior, Levatta says she was woken up. She realized she wanted the best in the world for her kids and things needed to change.

Dina Sosa, mother of Gabriella (12 years old) and Cecilia (5 years old), were surprised with the news that they had been chosen for our Homeownership program on March 4, 2021 at our offices.

In this video, Dina shares her emotional story of family, loss, hard work, and strength in community. After her partner passed away in 2020, she has worked hard to provide for her two daughters on her one income, but it has been incredibly difficult. The home they currently rent is in bad shape, especially after the winter storm of February 2021.

However, because of her partnership with Habitat, she is able to stay in Denton in a community she loves, raising her daughters surrounded by her large extended family, who all live here in Denton, too. Watch her excitement in this video as she describes the hope she has from being able to give her daughters a stable and secure home and future, thanks to Habitat.

Noe Sosa, Violeta Puga, and 3-year-old daughter Brigitte have been selected as the partner family for our 104th home. This hardworking, deserving family currently lives in an overcrowded one-bedroom apartment because they cannot afford a larger place of their own. Their daughter is getting older and needs her own room and space to play safely. With a Habitat home, they will finally be able to gain the strength, stability, and self-reliance they need as a family. 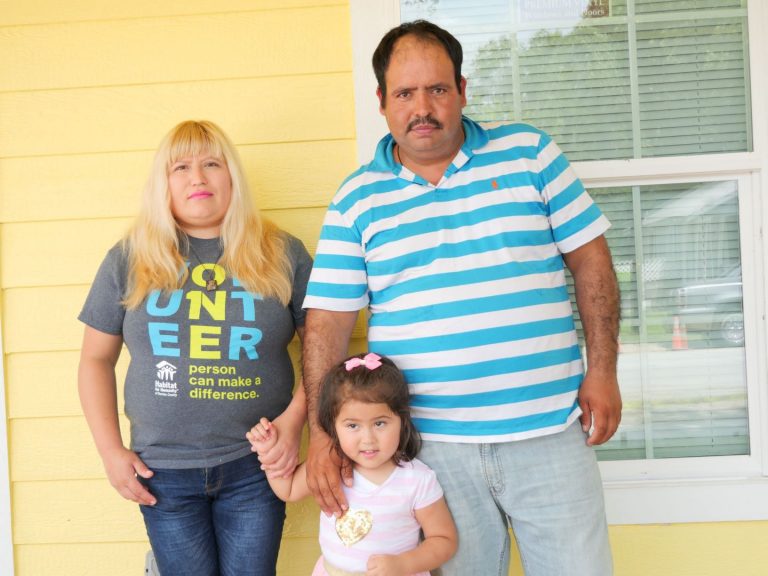 Carla Miller is a single mother with three children who finally have a safe, stable place to call home. This home was dedicated on July 30, 2020. Her oldest son, Austin, plans to join the Navy, while Charlie and Aspen live at home with Carla and have a stable environment to thrive at school, sports, and dance. Watch this video to hear their story of overcoming poor housing conditions and homelessness.

Ana and Gerardo and their three children finally own their own home. Watch this video as they share their story of building their home, becoming homeowners, and gaining renewed optimism and hope.

In 2001, Benedict Tarmo was a winner of the United States visa lottery, out of 50,000 people immigrating to the U.S. In 2004, Benedict left Tanzania alone and landed with his first host family in Las Vegas.

While in the U.S., Benedict could only visit his family once each year, making it difficult and depressing to be away. But in 2010, Benedict earned his U.S. Citizenship, and in 2012, after nearly a decade, Benedict’s family was finally able to reunite for good on U.S. soil.

The family of seven lived in a used and old manufactured home, which broke down and fell apart easily, with neither A/C nor heat working properly, making for cold winters and extremely hot summers.

The Tarmo Family was encouraged to apply for the Habitat for Humanity of Denton County homeownership program. They were chosen for a Habitat home and now live together in safe, affordable housing!

Watch the video to the right for the full story. 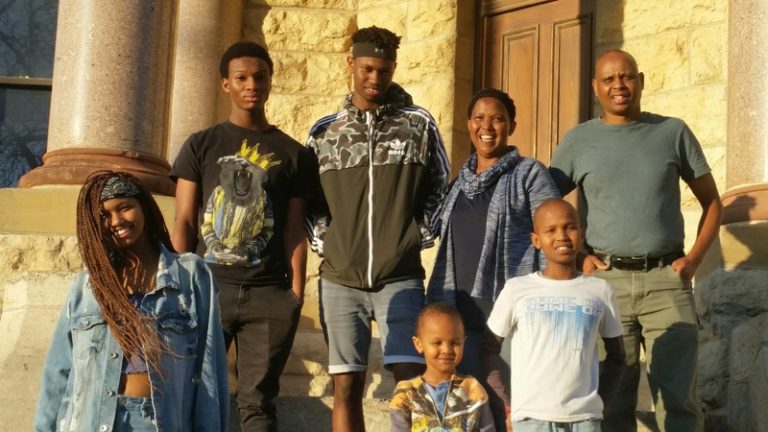 The Aviles family relocated to Texas from California and partnered with Habitat for Humanity of Denton County in the Fall of 2016. Rolando and Maria are the hardworking parents of four children. While everyone was happy to now be living in Texas, the struggle for Rolando and Maria to find a good, affordable home for their family had been a constant struggle. When asked what they wanted to achieve after purchasing their Habitat home, Maria said they hope to start saving money for their children’s college education.

Before her new Habitat home was complete, Sandra Acevedo said that her goal was to “provide her children a safe environment to build their dreams,” and with the help of Habitat volunteers and staff in September of 2016, she was given the keys to do just that. Sandra is a hard-working and dedicated mother of four, currently enrolled full-time at Western Governors University Online and working from home in order to save money. From her perspective, “my experience is proof that you can jump any obstacle that is thrown your way, as long as you have faith you can persevere.” She is working hard to save money to treat her children to well-deserved family vacations.

Mayra Salazar and her five children moved into their new Habitat home on February 2, 2016. Mayra is a full-time employee and exemplifies all the values that Habitat stands for: she is hardworking, has overcome struggles, and is willing to do whatever it takes to raise her family in a stable and safe environment. Before the completion of her new Habitat home, Mayra said that “God gives me the good health I need to work and achieve, so that I can show fellow single moms that by having faith, you too can purchase your own home.”

The Bukassa Family received the keys to their new Habitat home on August 30, 2015. In 2005, the Bukassa Family sought refuge from the war-stricken area of the Democratic Republic of the Congo and immigrated to the United States. Prior to this, Joseph Bukassa had founded numerous churches throughout Africa and Israel as a pastor and now owns his own taxi service while his wife, Eunice, works as a Registered Nurse. When asked why they wanted to partner with Habitat for Humanity of Denton County, Eunice replied, “We will finally be able to purchase our own home.” We want to raise our children in a way that is not financially stressful. By purchasing an affordable home, we will have a better opportunity to do so.”

Diane Schuth and her daughter became Habitat for Humanity homeowners in September of 1999. After living in a small, run-down trailer, Diane applied for a Habitat home. While she thought she didn’t deserve to be helped, she was oh so wrong. Her hard work awarded her a Habitat home, and her family’s quality of life changed drastically for the better.

Watch the video to the right for the full story.